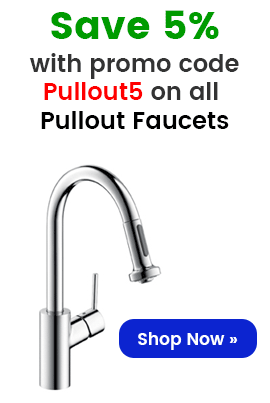 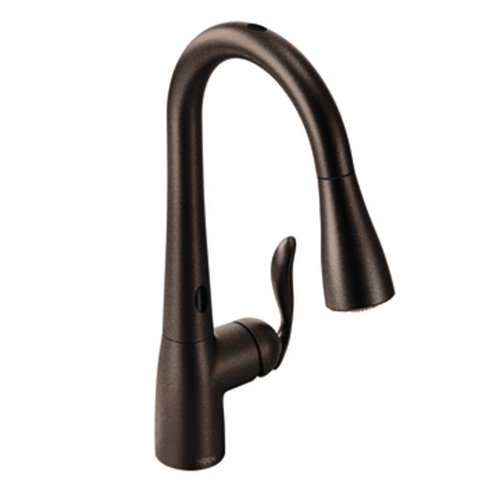 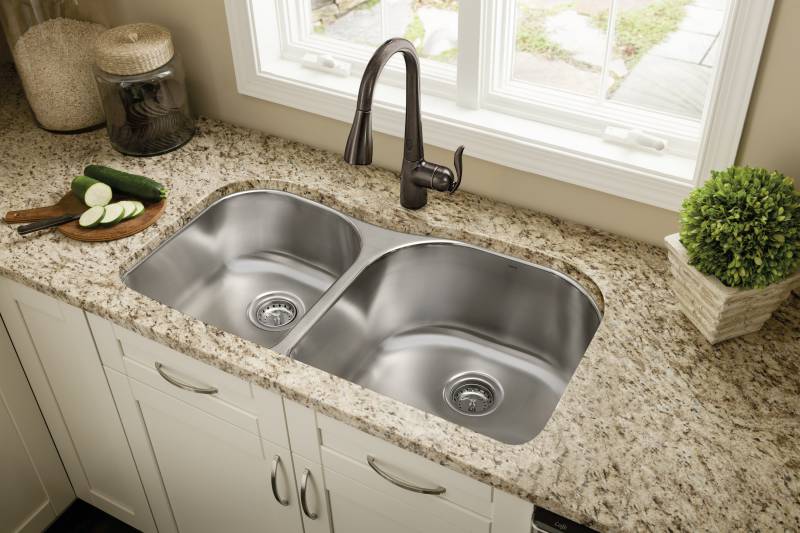 One or more weeks to deliver. Call or chat to inquire about the availability of this product.

100% of Customers would recommend this product to a friend

The Moen 7594EORB Arbor was purchased from Faucet Depot after a quick phone call and efficient email quote. Delivery was timely and without problems.The motion sense Arbor was selected as part of a desire to modernize our 20 year old white cabinet kitchen when my wife said she wanted to go to all black knobs and fixtures. Oil rubbed bronze (ORB) seemed to be the only choice and I knew that Moen was top quality. After waiting weeks for someone to install it for me, I impatiently said that I had to do it. The Motion Sense faucet has been installed now for a little more than three days and I am thrilled. It has met my expectations and more. It is revolutionary in concept and an engineering marvel of design simplicity, ergonomics and use of quality components. I had read reviews which gave me the misconception that the flow temperature, controlled by the motion sensors, was separately set by an under sink black box and completely different from that controlled by the knob. Not true. The simplicity of design with modern electronics has all water flow and water mixing done in the under sink black box with electronic controls sent to it from both the control knob and the two motion sensors on the faucet fixture. No water mixing actually takes place in the faucet. Hot and cold input water lines go only to the black box and out comes a single flex line that delivers the water directly to the pull down spout. Quality of design also is shown in several ways: 1) For most common installations, ( unfortunately, mine was so common ) only a screwdriver and small adjustable crescent wrench are needed. 2) The three hoses, hot, cold and flow line are all very flexible, quality lines. Hot and cold lines are more than long enough to reach plumbing for most installations, and the other ends simply snap into the black box. The flex flow line to the spout head, also, simply snaps into the black box. 3) The pull down spout head feels very natural with easy use of the spray vs. flow switch on the under side. 4) The black box is designed to be simply snapped onto the end of the threaded, under sink, drop down pipe from the faucet. Unfortunately, I couldn't use that feature because of tight spaces and other plumbing under sink. 5) The battery box simply pastes onto the under sink wall with double sided sticky foam pad.Now for the problems: 1) The faucet can be mounted only with the control knob on the right side; not available for left side mount. My double basin sink has three holes, space by 3 inches, with the left hole used for the faucet directly behind the two basin divider. The other two holes for air gap and soap dispenser are to the right of that and behind only the smaller right sink basin. The Arbor manual faucet control knob protrudes far enough to hit the air gap. Therefore, something had to give. I searched the web for a smaller air gap that would not interfere with the control knob, but nothing such existed. Since the arched faucet will swivel only + / - 50 degrees about the front when the manual control knob is on the right, the knob had to be on the right for the faucet to be used over both sink basins. With the help of detailed faucet measurement specifications supplied by Moen, I calculate that if the faucet were mounted about 15 degrees forward of the right side, it would clear the air gap and still allow the faucet to swing about 35 degrees over the smaller right sink basin. I bought the smallest air gap cap that I could find, a Kohler model also from Faucet Depot. That plan worked very well. 2.) Even with all the easy installation design by Moen, the underside of my sink did not allow the black box to be mounted by snapping it onto the threaded under pipe. To the left, the large deep basin and its closeness to the cabinet framing interfered with it. To the right, the plumbing from the air gap interfered with it. The threaded drop pipe was not long enough to extend below the deep basin sink. I wound up attaching the black box, via several screws and big washers through the large snap on tab of the black box, to the bottom edge of some cabinet framing. That was much more work than I anticipated. It was only after complete installation that I read in the users manual that an alternate black box for wall installation could be obtained from Moen. They could have told me that in the installation manual. 3) Of the two motion sensors, the "Ready sensor" did not operate properly. So, like any computer, if it doesn't work properly, you turn it off and then back on. I unplugged the power to the black box, waited a minute, then plugged it back in. Now it works wonderfully.Comments: 1) I appreciate the system engineering that went into the design of this faucet. One element that was not systems engineering but was done more for promotional design appeal was the size of the manual control knob. It is 100 percent electronic with no hydraulics involved. It doesn't have to to be that big nor stick out that far. 2) There doesn't

Join Our Professional Site for Deeper Discounts with Access to Inventory at 21 Warehouses! Click for More Info